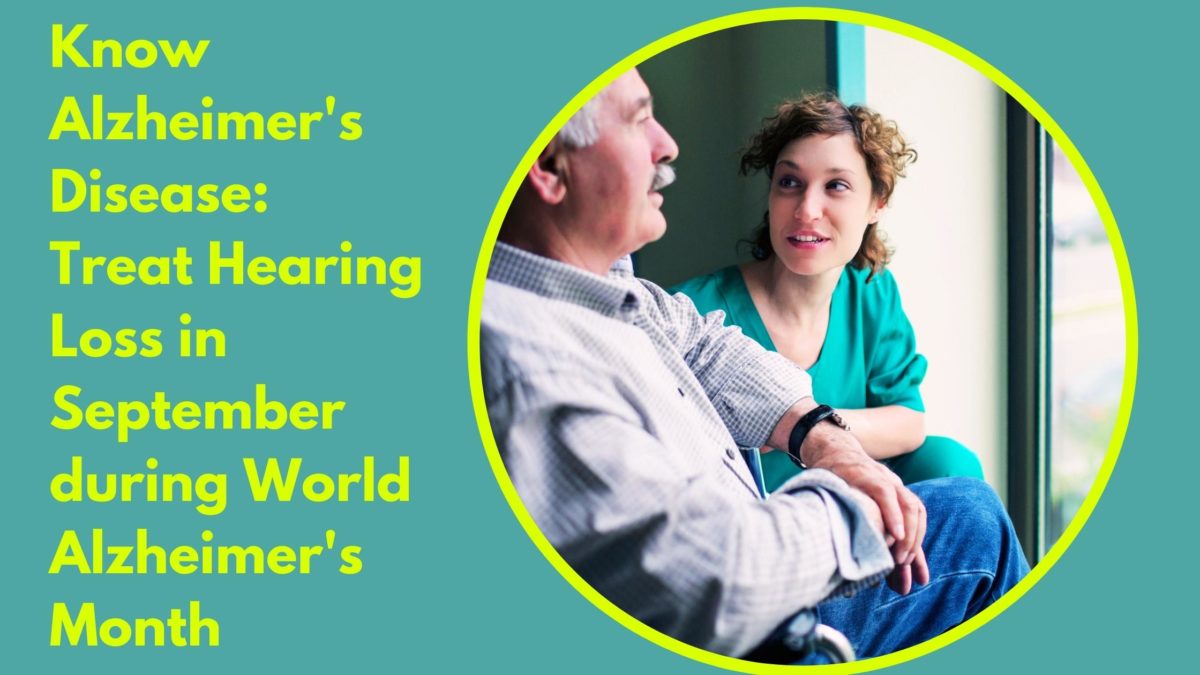 Everyone struggles to remember things every now and then. However, as we reach the age of 65 and older the risk for developing cognitive decline and Alzheimer’s disease increases significantly. One in 16 over 65 years old have Alzheimer’s while the risk doubles every five years.  Alzheimer’s is the most common form of dementia, a category of brain diseases affecting at least two cognitive functions, such as memory and judgment. Alzheimer’s Disease affects over 50 million people worldwide is attributed to 60%-80% of all dementia cases.

Each September, the Alzheimer’s Disease International (ADI) holds World Alzheimer’s Month, to educate, advocate and fight the stigma around this devastating brain disease. For the hearing health community, this is also an important time to bring attention to the importance of treating hearing loss.

What is Alzheimer’s disease?

In 1906, Dr. Alois Alzheimer discovered a condition after identifying abnormalities in the brain tissue of patients with similar mental health issues. He identified a neurodegenerative disease in which amyloid plaque and neurofibrillary tangles, which attached themselves to brain cells causing them damage and destruction. Amyloid plaques are clusters that form in the spaces between the nerve cells, while neurofibrillary tangles are like knots in brain cells. Both make it difficult for brain cells and brain tissue to communicate with one another and ultimately destroy the cells.

What are the Symptoms?

Symptoms for Alzheimer’s start subtly and gradually get to the point where motor skills are lost, and a person requires 24-hour care. This can be difficult not only for the person affected by the disease, but for the loved ones of the patient who feel left behind, even as their dear one is still in their midst. Symptoms of Alzheimer’s disease include forgetfulness, impaired social skills, compromised reasoning, and interference with completing simple tasks. While there is no cure for this condition there are several methods on how to slow or prevent the condition.

There are many factors which increase your risk of dementia. Some of these cannot be modified such as advanced age or family history. However, the Lancet Commission identified several risks which could be modified throughout a lifetime, to decrease the risk of dementia. In 2020 they released a report titled, Global Mental Health & Sustainable Development, which built on research from 2017, identifying 12 risk factors leading to dementia that could be avoided by changing behavior. The commission reported that modifying any of these factors could delay or prevent 40% of dementia cases globally. The 12 modifiable factors include:

The Lancet Report also listed unaddressed hearing loss as a modifiable risk of developing dementia. Many of the other risks of dementia are amplified by untreated hearing loss. For instance, under socialization can occur as people struggle to hear in social situations. When hearing loss is untreated it is easier to stay at home avoiding social situations. This can lead to under stimulation, a less active lifestyle and cause chronic depression.  Even more alarming, when someone avoids exercise and is depressed, they are at a higher risk for hypertension, diabetes, excessive alcohol use and smoking.

It’s important to understand that your total health is interconnected. If you struggle to hear, it affects every aspect of your life from your physical health, emotional health, and cognitive functioning. This September, use World Alzheimer’s Month as a call to action and schedule a hearing test today! You can start by protecting your hearing, but you may potentially protect the memories of your lifetime!